Mourne Textiles children’s blanket, £96. Photograph: Tara FisherNestled in the foothills of the imposing Mourne Mountains in County Down is a third-generation weaving company straddling the mid-20th century and the future. Mourne Textiles’ elegantly rustic fabrics, throws and cushions in wholesome, subtle colours have an appealing, pared-down aesthetic, so it’s unsurprising the brand caused a storm at a London design show last month.   “There is something different about a hand-woven piece,” says Mario Sierra, who took his family company’s helm three years ago, to relaunch its distinctive textured weaves. “The emotions of the weaver are captured in the subtle irregularities of the fabric.” In a world over-filled with machine-made objects, provenance is becoming increasingly important; we love history, heritage and the idea of buying something with a story. All of Mourne’s textiles are handmade in its remote Northern Ireland workshop; even the yarns are custom-spun for that “lumpy” quality that gives the pieces so much texture.   Sierra took his first steps beneath a loom and learned the craft from his mother, Karen Hay-Edie, and his late grandmother, Gerd Hay-Edie, a pioneering spirit who set up the firm in the early 1950s. “Growing up, the workshop was my playground, and the clack of the shuttles was my background noise,” he says.

Mourne Textiles children’s blanket, £96. Photograph: Tara Fisher The story of Mourne’s inception is almost as beguiling as the textiles themselves. Born in Norway in 1909, Gerd Hay-Edie studied design and weaving in Oslo and, at 20, was invited to set up a weaving workshop in northern Spain. She moved to England a year later, in 1932, and was appointed head designer at Dartington Hall. After marrying an English expatriate in 1938, Gerd Hay-Edie moved around Asia, but in the late 1940s she and her four children settled in the Mournes. “There was a real similarity between that landscape and the fjords,” Sierra says. “It must have struck a chord.”   Gerd originally planned to run a design studio but, when she couldn’t find the craftsmen to weave her creations, began training local farmers’ daughters at the looms, buying traditional Irish yarns from a mill in Donegal. “She was a firm believer in bringing jobs to the local workforce,” Sierra says.   It was a collection of rug samples that drew the attention of the late designer Robin Day, who commissioned one for a room set at the Milan Triennale in 1951. The rug, together with a woven wall-covering, were displayed at the Festival of Britain the same year, sparking a long-term collaboration with furniture brand Hille, maker of Day’s bestselling Polyprop chair.   Gerd’s textural tweeds caught the eye of Irish couturier Sybil Connolly, who travelled from Dublin to appear, unannounced, at the workshop. Connolly’s 1956 collections featured three of Gerd’s weaves (Sierra has brought these designs back to life in a range of cushions and throws). In its heyday, the workshop also wove for Sir Terence Conran and Liberty. 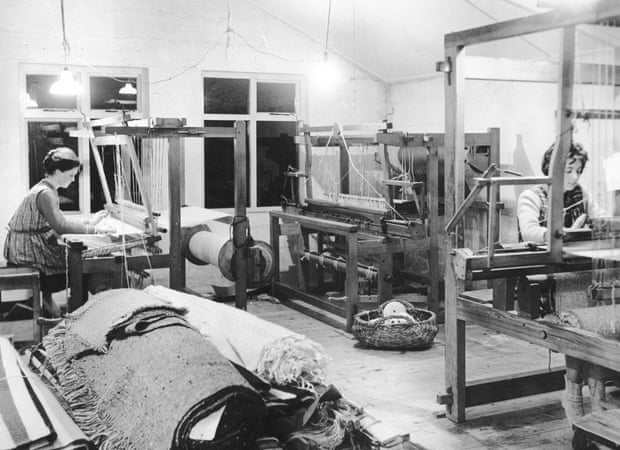 The Mourne Textiles workshop in the 1960s. Photograph courtesy of Mourne Textiles When production started to move to the far east in the late 1970s, the firm’s orders slowed down, compounded by the Troubles in Northern Ireland, which saw the tourism industry dry up. Gerd gradually let the weavers go, although her daughter Karen kept the looms moving for weaving courses and commissions.   Sierra studied textile art at Winchester School of Art, then pursued a career as a sound recordist. “I kept going back to the workshop, though; I always knew I wanted to bring it back to life,” he says.   The catalyst came three years ago with a phone call from a buyer at Margaret Howell, who had discovered a sample book of the Mourne check fabrics while looking through some Robin Day archives. “We made up a few cushions and they placed their first order; it started the whole process off,” Sierra says.

Mourne Textiles cushion, £185, and throw, £195. Photograph: Tara Fisher Working with his mother, he began to produce some of his grandmother’s iconic designs, using the same looms she had imported from Norway. “Going through the archives requires real detective work. When we were recreating the Milano [Triennale] rug, we worked from a scrap of paper with her shorthand notes on the threading.”   With the help of a small grant from the Arts Council of Northern Ireland, Sierra now has four full-time apprentice weavers as well as two local weavers, one of whom is in his 80s and used to work for Sierra’s grandmother. “I have grown up with John all my life, and still call him for technical advice,” says Sierra, who drops off the warps so John can weave from his shed. Another of his grandmother’s former employees is Gerard Sloan, who now makes the “cheeses” – large spools from which the yarn is fed on to the loom. “Having that first generation with us as we take the company into a new phase is so important,” Sierra says.   While some of the textiles are faithful reproductions, others have been reimagined, with colours and yarns adapted to current tastes. “My grandmother would have wanted it,” says Sierra, whose Instagram account has more than 8,000 followers. “I came across an old newspaper clipping in which she was quoted as saying: ‘Out of the past flows the future.’ It sums up how we want to evolve the company.”   Mourne’s rich heritage forms part of the very fabric of the firm: this year saw one of Gerd Hay-Edie’s weaves, the Mourne Blazer, reunited with Robin Day’s classic reclining chair for the centenary of Day’s birth. “Blazer was originally designed by my grandmother for Hille, following her meeting with Day, so it felt like a very fitting tribute to both designers,” Sierra says. “It feels as if we have come full circle.”   Three new artisans to watch

Naomi Paul crochet pendant, from £802. Photograph: Nick Rochowski Naomi Paul Naomi Paul has taken the classic craft of crochet and turned it into a sophisticated means of construction, creating a range of sculptural pendant lights made from fine, knitted cord. Defined by their textural quality, strong colours and simple shapes, the lights are made to order in Paul’s studio space on the edge of Hackney Marshes in east London.